Two weeks ago Pope Francis addressed a meeting of those working to promote social, economic and racial justice across the world. He described them as Social Poets, because they are creating “hope where there appears to be only waste and exclusion.”

The recent history of St Stephen Walbrook owes a great deal to one such social poet; Chad Varah – who on 2nd November 1953 took the first call from someone contemplating suicide, on what became the world’s first telephone helpline. The organisation that we know as The Samaritans was born.

Find out more in this week’s Start:Stop reflection. Listen to the recording at the link above, or read the transcript by clicking here. 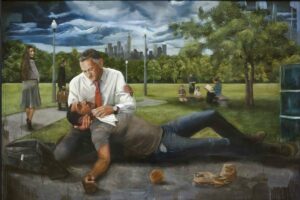